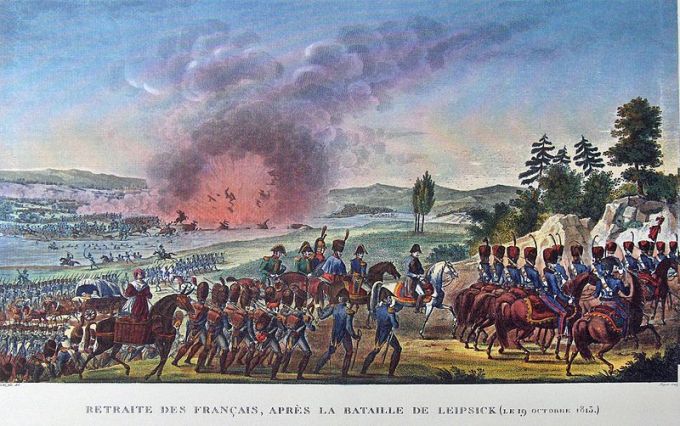 As we approach the hundredth anniversaries of the battles of the First World War, we feel a sense of its perpetual importance – a sense in which it overshadows our whole world with such commanding opacity that it need rarely be articulated. Not only does the subliminally inevitable chain of Versailles, Woodrow, Weimar, Depression, Chamberlain etc., flicker through our minds, but also a profound fear of the sombre and macabre ghost of war itself. And because the Great War is forever imprinted in our historical consciousness through the images of young men – swathes and swathes of them – senselessly slaughtered on the fields of Europe in the names of empires we today feign to recall, our commemorations of it should serve also as reflections on the inner nature of war and of the terrifying debt our modern world owes it. It seems fitting, then, that this centenary is to be preceded by the bicentenary of the battle which, until shots rang out in Sarajevo, constituted the greatest, most brutal and most overwhelming military engagement the world had ever seen. This was the defeat of Napoleon at Leipzig, a conflict which posterity would recall as ‘the Battle of the Nations’ (or, in German, die Völkerschlacht).

Possessing an army severely depleted by the preceding Russian and Peninsular campaigns and allied with a string of European nobodies, Napoleon faced a forbidding Sixth Coalition comprised of the Prussians, Austrians, Russians and Swedes. The first skirmishes transpired on the morning of 15October, with the outbreak of aggressive hostilities following on the 16th. Yet while Napoleon endured steadfast on this day, his protective advantage was predictably short-lived. Throughout the ensuing two days, he was forced into an increasingly defensive position, facing sustained attacks from the north and south and witnessing the humiliating defections of his Bavarian and Saxon allies along the way. On the 17th, the Prussian general (and later hero of Waterloo) Blücher attacked cohesively from the French rear, helping rupture the Emperor’s communications and exposing his distinct lack of numbers. In large part owing to the attack of General Bülow’s Prussian forces (a corps within the Northern Army of Bernadotte – formerly Napoleon’s Marshal of the Empire and now heir to the Swedish throne), the French forces were effectively cut off from the Elbe early on the 18th. The Prussians lost many thousands of casualties in this advance but, critically, forced Napoleon into an unwinnable position. From there it was a crushing westward retreat to the Rhine and thence to France, with the Coalition entering Paris six months later.

In a purely political sense, the battle was of tremendous consequence. As the first total defeat of Napoleon, it effectively concluded the Wars of Liberation in Germany and thus signalled, for the first time at least, the beginning of Napoleon’s end. This would ultimately culminate with the Treaty of Fontainebleau, bringing Europe’s first continental peace in years and sending Napoleon into exile at Elba. To the Coalition allies, it seemed not only to herald the end of the Napoleonic Empire, but of the Revolutionary era itself, with Metternich remarking on the 18th that ‘the cause of the world has been won’. Europe’s borders would be redrawn in its wake, and Germany would begin its meander toward unification. However, the monumentality of this event as a battle nevertheless bears emphasising. It constituted some half a million soldiers, drawn from all corners of Europe, employing over two thousand artillery pieces. Of these, more than one hundred thousand were killed, either in the battle itself or by the typhus epidemic it left in its wake. In total, it constituted the largest battle to have ever occurred; a mantle it would retain until the twentieth century. Yet in the Anglosphere at least, the battle perhaps lacks its continental fame, flanked in the Napoleonic chronology by Trafalgar and Waterloo. The bicentenary, then, may be the jolt that our historical consciousness requires.

Today the surroundings of Leipzig lay under the shadow of the colossal Völkerschlachtdenkmal, a 90m high monument to the battle erected on its one hundredth anniversary in characteristic Wilhelmine ostentatiousness. More a monumental crypt of antiquity than any emblem of dignified solemnity, it consists of some 300,000 tons of granite and is encircled by ten enormous sandstone ‘guards’. While purposely designed to surpass the Statue of Liberty in height, however, it embodies nothing better than the decadent power of the Hohenzollern spirit. For the timing of its construction could not have been more apposite. Within a year of Kaiser Wilhelm II proudly declaring the monument open, troops of the German Empire were marching in his name toward Paris, and before long French soldiers would again fight on German soil. In their different ways, both the National Socialist and Communist regimes would come to celebrate the Völkerschlacht as an unprecedented triumph – for the former as the birth of German unity, for the latter as an emblem of German-Russian friendship. But when tens of thousands of people from all over the world converge on Leipzig this month, little if none of this will feature. The official commemorations will centre on reconciliation, community and European interdependence. It will be in many ways a celebration, and a time to reflect on the past, present and future of the ever-ambiguous European Project. But throughout this month and long into the future, it is the monument and the battle itself which will loom largest: the former for its scope, impact and body count; the latter for reminding us of the interminable fragility of peace.  Perhaps the last word should therefore be left to the British diplomat George Hamilton-Gordon, 4th Earl of Aberdeen, who surveyed the carnage of Leipzig in the battle’s wake:

‘For three or four miles the ground is covered with bodies of men and horses, many not dead. Wretches wounded unable to crawl, crying for water amidst heaps of putrefying bodies. Their screams are heard at an immense distance, and still ring in my ears. The living as well as the dead are stripped by the barbarous peasantry, who have not sufficient charity to put the miserable wretches out of their pain. Our victory is most complete. It must be owned that a victory is a fine thing, but one should be at a distance’.