In celebration of the holiday season, we bring you a cheery selection of  photographs, one video and other paraphernalia that shed light on the ways Australians celebrated christmases past.

Many of these sources come from the State Library of QLD, which has digitized significant parts of its collections and made them available to the public via wikicommons. We’ve also raided the National Archives of Australia’s PhotoSearch.

On 25 December 1913, this Baroona family stood around their piano to sing together (or maybe just pose for the camera?).

Singing around the piano at Christmas in a home in Baroona, Queensland, 1913. From the State Library of QLD, via Wikicommons.

And two Christmases later, the nation was at war. This front cover of the Queenslander’s Christmas supplement depicts a lonely Christmas without those family members who had been sent to fight in far away battles. The front cover of The Queenslander Christmas supplement in 1915, State Library of QLD 212620, via wikicommons

In December 1938 , the Sanitary Man (also known as the ‘Dunny Man’) left this Christmas note, nostalgic for the backyard dunny (that’s a toilet, for our non-Australian readers!) that was being replaced as the sewerage network expanded in Australian cities. This scared kangaroo stared on the cover of the December issue of the Australian Women’s Weekly in 1954, continuing a long tradition of non-religious and Australiana-themed Christmas covers. You can see more at McWriter’s project blog. 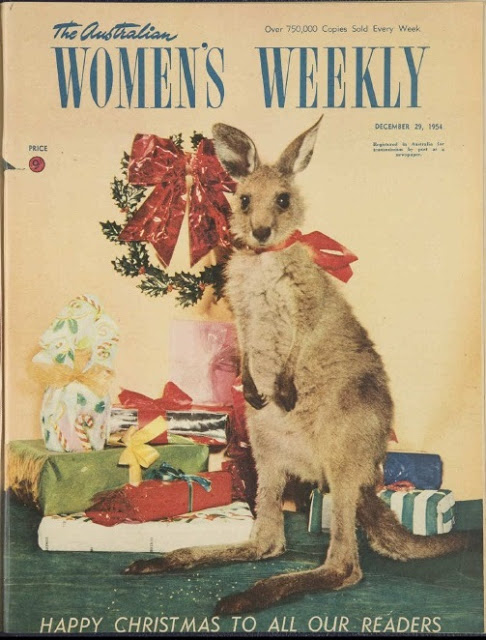 This quaint video made by the Commonwealth film unit in 1958 includes some great footage of city shopfront Christmas window displays, workplace holiday parties, a hospital nursery, and a country church. Very cheesy, but very cool.

In 1964, this Dutch Santa, accompanied by ‘black peter’ paraded through the streets of Melbourne. In the Dutch tradition, black Peter is Santa’s slave or servant, played by a white man in black face. Surprisingly this racist tradition is alive and well in Holland, where many are campaigning against it.

St Nicholas visited Australia – to the delight of thousand of Dutch and Australian born children this month (December). Accoompanied by “Black Peters” a band, mounted police and Dutch people in national dress, he rode on white horse along Swanston Street – one of the main streets of Melbourne, Australia’s second biggest city and capital to Victoria – to call on the Lord Mayor, Councillor Leo Curtis, at the Melbourne Town Hall, on December 3. Dutch migrants in national dress accompanying St Nicholas to the Melbourne Town Hall. From the National Archives of Australia. 7428245

In 1970, this Santa visited a Sydney store (vague, we know), with a kangaroo in tow.

2 thoughts on “Christmas in the Archives”