Posted on February 14, 2014 by historyitm Uncategorized 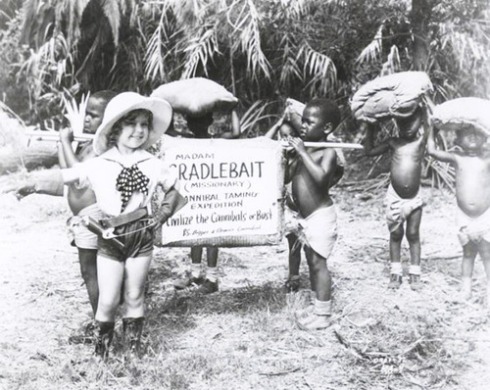 Shirley Temple Black passed away this week, and the media has commemorated the former child-star and US ambassador to Ghana and Czechoslovakia.

The Vault (Slate’s History Blog) has been one of the only voices to remind us that Shirley Temple’s early performances in the short-film series Baby Burlesks are “Really hard to watch“. The 1933 episode Kid in Africa depicts a 4 year old Shirley in a sexy outfit (challenging the idea that the sexualisation of children is a 21st century phenomenon), playing the role of a white overseer commanding black workers doing heavy labor in a jungle setting. It was supposed to be cute.

The Baby Burlesks were shorts, played before the main attraction. They satirized popular movies: What Price Glory?,The Front Page, The Covered Wagon. The joke was that the actors were all under the age of 5. Historian John Kasson writes of the Burlesks: “The intended humor of these shorts, which seems exceedingly strained to modern viewers, rests on the difference between adult knowledge, desires, motives, and pleasures, and childhood innocence.”

This short film and the Baby Burlesks series is an interesting window into US depression-era culture.